It is not every day that you have the chance to venture into the belly of the beast, deep inside a dormant volcano. I seized the day on June 16, 2013 and made my way deep into the bowels of Thrihnukagigur (Þrihnukagigur) volcano, a short 35 minute drive from downtown Reykjavik. There’s something amazing and new on Iceland’s tourism scene, and in my previous winter journeys, this was inaccessible to me.

Jules Verne would be proud. His 1864 science fiction novel, Journey to the Center of the Earth featured his intrepid travellers journeying down into the belly of the earth via the looming volcano at Snæfellsjökull‎, on west Iceland’s Snæfellsnes peninsula.

I remember staring in fascination at papier maché mock-ups of volcanoes when I was a child, amazed at the power that could spring forth from the earth. I’m drawn to volcanoes, their magnetic pull luring me in. But I kept wondering what it looked like from the inside. No amount of National Geographic diagrams could satisfy the curiosity.

A few weeks before heading off to Iceland for a friend’s wedding, a targeted ad popped up on my Facebook feed for Inside the Volcano. Or was it an article? I don’t know, but Facebook was to blame. There it was. An opportunity to descend 120 metres deep into the belly of the dormant Þrihnukagigur’s magma chamber, a unique geological condition created by the last eruption of this rock, approximately 4000 years ago. In most cases, the volcanic crater seals off with cold, hard lava after an eruption, the volcano inside an impenetrable fortress. Þrihnukagigur isn’t sealed off – and the volcano is not currently geologically active. And the super friendly staff at Inside the Volcano will take you there.

It’s a foggy day as we set out for the volcano. Our guide insist you can see the summit of Thrihnukagigur looming above our hike, but I struggled to see more than 20 metres in front of me. Over 3 km of slippery lava fields, we trekked.

Beginning the trek to Thrihnukagigur

Not a steep hike by any definition, but the quick pace and the slippery terrain tore at me. I alternated between being a hot, sweaty mess under my waterproof, windproof layers, and shivering into the windy drizzle stinging my face. My hair was thoroughly soaked, but I couldn’t tell if it was mostly from the elements, or from too many cheese appetizers. Probably the cheese. My lower back muscles screamed from not stretching, and my ankles thanked me for remembering to pack hiking boots. And I was was relieved that I wasn’t parading about in borrowed neon orange rain gear, like other members of our party.

Approximately a half an hour into the hike, our guide hopped over a crevasse in the ground. She pointed to the jagged edges as we gathered around. 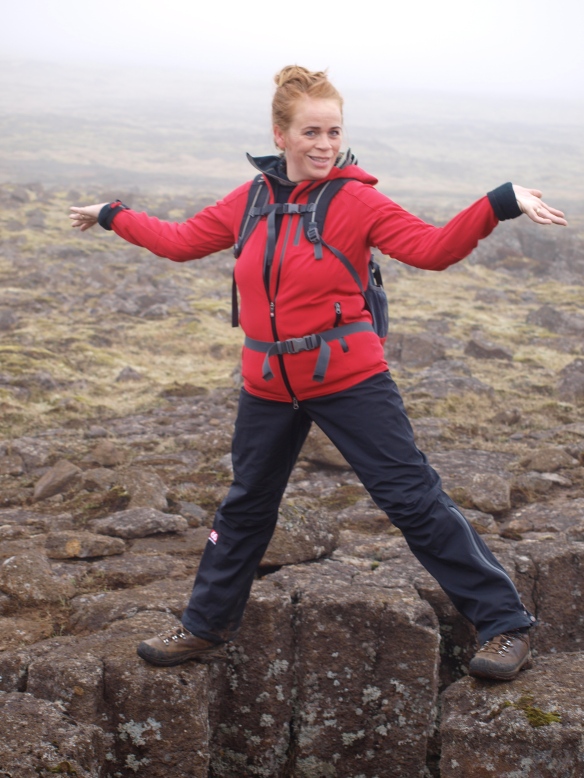 “This is where the North American and Eurasian tectonic plates are pulling apart. This is what gives Iceland its geological might, and they are moving at a speed of 3 cm per year.” She proceeded to yank us all one by one to safety on the other side, and away I waddled. Hmm. Now would be a good time for some cheese…

At Base Camp, we traded backpacks and water bottles for safety harnesses and helmets equipped with headlamps. While waiting for my turn inside Thrihnukagigur, I made a new friend. Flame is an orphaned 2 week old baby arctic fox found wandering around base camp, and the staff have adopted him as their mascot. And I was there during lunch, so the fox and I got along wonderfully. Who wouldn’t? Look at this fluffball!

I contemplated smuggling him home with me, but I decided he was a lot happier here alongside the volcano and the legions of attentive fans. 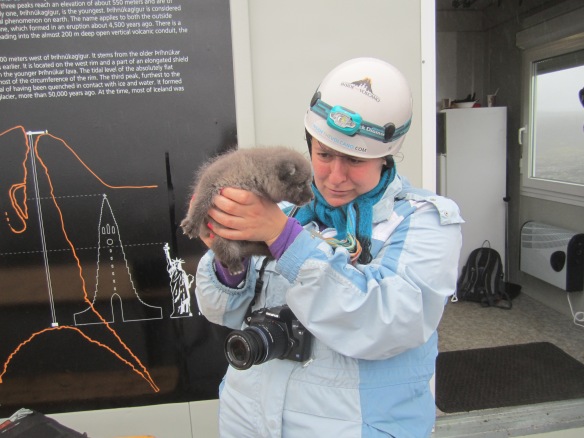 Can I keep him? Please?

It was time. I trembled as I walked to the open-air lift that would take me into the volcano. What if it erupted? When would I use the safety equipment? What would I see down below? Would it be scary inside the volcano?

A descent into the centre of the earth

I look up, and the crater grins at me, filtering rain water onto my head. The rocks transform immediately. Jagged, angular, red, blue, yellow. Flowing. A landscape of tectonic violence, frozen in time.

Will I ever see daylight again?

Iron and sulfur clash with me senses, and suddenly there are only three people inside the volcano, myself included. I perch on a pile of boulders and inhale deeply. I am torn between the desire to photograph everything, and to put away my camera for a few minutes and drink it all in. Every shift in weight on the rocks echoes. Ever breath. And my eyes dance around, not sure where to look first. 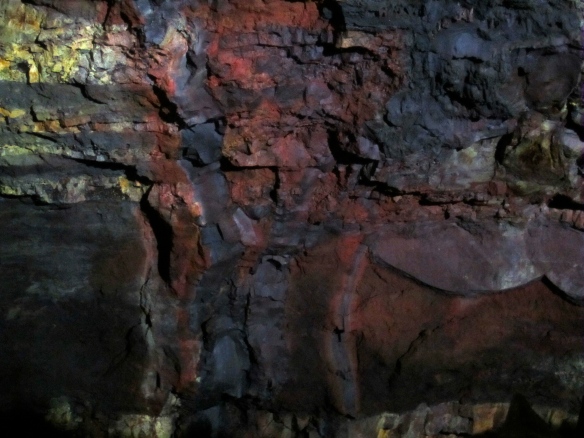 Deep inside Thrihnukagigur, the colours dance before your eyes.

I juggle an assortment of cameras – dSLR, point and shoot, and as a last minute addition to my pocket, an iPod. Each one captures the light differently, and the dSLR capture video. I curse the lack of tripod, as they each capture my trembling within the depths of earth’s creation forces. I’m in awe.

Swallowed up by the earth, here hides a hoboshutterbug

I feel tiny and insignificant deep within the planet’s crust. The Statue of Liberty would easily fit inside the cavern, with ample room to spare.

A staff member enjoying a typical day on the job.

Gloves off, my finger tips caress a sleek yellow boulder before me. Take nothing but pictures, leave nothing but finger prints. It is cool to the touch, smooth surfaces, jagged edges. My mind imagines human faces in the rock. 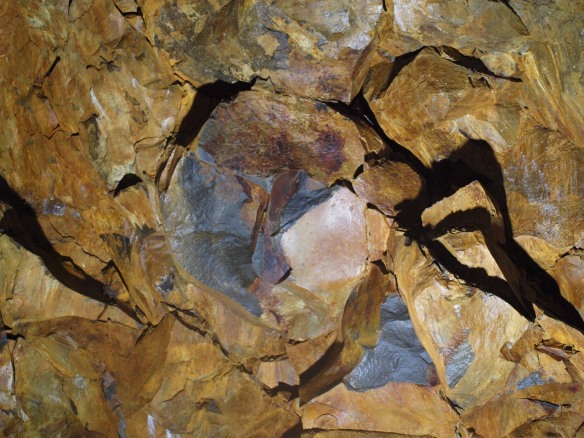 A staff member belting Phantom of the Opera as he descends down the lift brings me out of my solitude. The acoustics are unlike anything I’ve ever heard before, and I fantasize about recording possibilities in the bowels of the earth, logistics aside. He coaxes me gently into the lift. My time inside the volcano is already over.

The journey to the surface leaves a lasting image of the walls melting in my head. Frozen in time, solidified lava drips will forever come to mind when I complain that the heat makes the walls melt.

Forget the floor is made of lava. The walls are melting! MELTING!

Iceland’s muted daylight hurts my eyes when I am back on the surface. In the land of perpetual daylight, I cannot tell if it is 2 p.m. or 2 a.m. when I emerge. 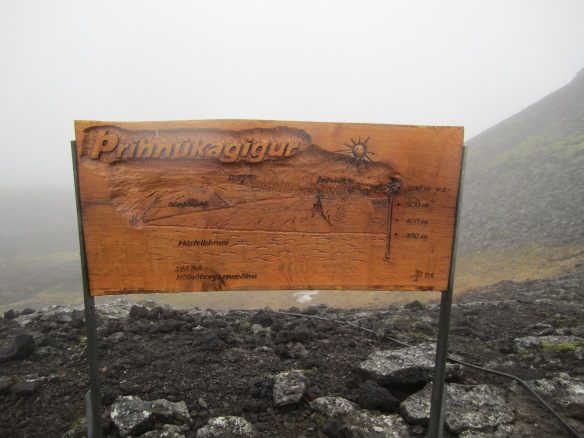 I am quiet on the journey back. I lag behind, lingering in the fog. The path of moss and lichens lead me back to the bus, orange rain gear leading the way. 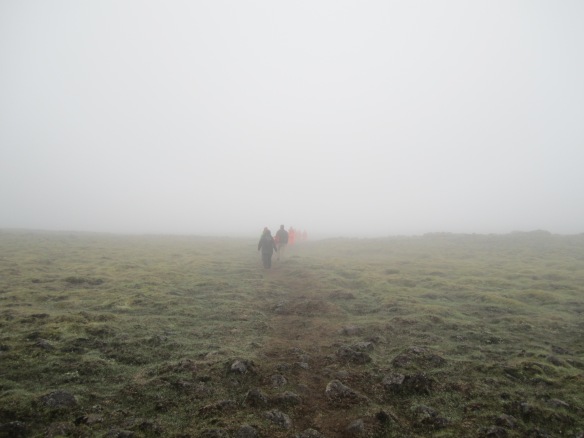 Into the lava field gloom. On a clear day, you should be able to see Reykjavik during this hike.

I leave you with a few more images from the journey Inside the Volcano, a memorable experience that far exceeded my photographic skill. What else is there to say, when you finally satisfy a curiosity that has plagued you for at least 25 years? Copies of National Geographic that I would carefully borrow from my father’s bookshelf as a child, and gingerly turn the pages with clean fingers spring to life in my memory. A month ago, I did not even realize that you could travel into a volcano. The moment I read about it, I knew I was hooked and I had to give it a try. A 37,000 ISK price tag slowed me down for a few days, but I had to give it a try. I finally understood the repetitive magnetic pull Iceland had on me. It was inside the volcano all along.

A hoboshutterbug needs a safety helmet at all times.