I have not really had the opportunity to write much this week. Unfortunately, this is not due to me running off on some fantastic adventure. I have been spending a lot of extra time tending to a dying pet. She takes up an extra hour or so of my time every morning, and another hour or so of my time in the evening, on top of the hour or so a day I try to spend playing with the pets. We’ve developed a routine: I try to give her anti-inflammatories and glucosamine for her arthritis twice a day. I end up wearing most of her medication. I also slowly feed her soft foods, since the arthritis has affected her ability to hold food the way she used to. The end is near, and my main goal right now is to give her the best quality of life at this stage of the game. It’s a question of a few days – maybe a week or two. END_OF_DOCUMENT_TOKEN_TO_BE_REPLACED

This is the story of Chiquita, the traveling monkey. It is not exclusively my story to tell, as she is not exclusively my monkey. (Note: I’m using other people’s photos here, with their permission. If your image has slipped into the batch without permission and you would like me to take it down, I’d be happy to. I’m sorry if I ganked the wrong photos!) END_OF_DOCUMENT_TOKEN_TO_BE_REPLACED

A fence, a wall, a divider runs through the land. Some have called it the Berlin Wall of the 21st century. Some call it a land grab, some call it a security fence, some love it, some hate it. I crossed it. END_OF_DOCUMENT_TOKEN_TO_BE_REPLACED

Growing up in Canada, I took borders for granted. I grew up in a magical time when you could cross the Canada/U.S. border with a birth certificate and a driver’s license or a government issued health insurance card. Now I realize this magical era only officially ended in June 2009, but the era of the easy border crossing truly ended back in 2001. END_OF_DOCUMENT_TOKEN_TO_BE_REPLACED

I looked through all of my old travel books recently, and I noticed one glaring omission from the pocket translation guides at the back. I don’t always buy the same series of guides – I have some Lonely Planet guides, some Frommer’s guides, a Rough Guide or two. At least I know this isn’t just a glaring fault from one publisher. In the quick translations, they all have the same core information – how to order certain common meals, how to ask for an ambulance, how to say in the native language of the country that you don’t speak their language but you speak X, and how to say the most common illnesses or injuries that will land you in a foreign doctor’s office.

But none of them have the translation for, “Oh crap, I’ve got a really bad sunburn, where’s the stinking aloe vera?” As if I’m the only pasty Canadian who burns to a crisp on shady days in May in Italy even if I’m wearing sunscreen. They also all universally lack an explanation that your skin is itchy and you’d love some cortisone cream, and surprisingly all lack an explanation that you’ve got a dodgy traveler’s stomach and you just might be willing to trade your left kidney if someone would let you use their toilet for a few minutes.

Last year I went to the beach in Sardinia on a cloudy day in early May. I applied a ton of sunscreen. I stayed in the shade, such as it was. I covered my skin. I wore a hat. I reapplied my sunscreen. Low and behold, that evening I felt the heat radiating off my skin at an alarming rate. I took a cold shower and emptied my entire 100 ml tube of aloe vera on my shoulders and chest, but the heat continued radiating off my skin. I gingerly got dressed and went looking for the telltale green cross of a pharmacy in Italy.

“Bonjourno! Parlate inglese o francese?” I said to the pharmacist. He shook his head no.

“Aloe vera?” I tried, hoping the the Italian word would be close. He smiled and shook his head. He didn’t understand. I fumbled through my dictionary, but aloe vera was not in there. I pointed at myself.

“Io sono canadese.” I am Canadian. He smiled and nodded. Things were starting to click!

I pointed outside at the setting sun, then pointed at my skin. I mimed going swimming. “Rosso! Aqua!” Red! Swimming! I touched my arm and the skin turned from bright red to snow white. “Ouch!!!!!” The pharmacist promptly burst out laughing and produced a €17 tube of aloe vera labeled valoes with a drawing of an aloe plant on it.

As one could imagine, it wasn’t any easier buying cortisone cream for a heat rash in Saigon. I went to 4 or 5 pharmacies until I found one with a Parisian educated pharmacist who obviously spoke French. I showed my itchy arms to all the other pharmacists, and they pulled out everything from lice cream to Viagra. One offered me morphine.

On the bright side, I’m not going to share photos of my sunburns or heat rashes. Consider yourselves spared.

I first saw the ocean when I was probably 8 years old. My family went on the one and only family vacation we ever took, and we drove from Montreal to Wildwood, NJ. The drive took forever, in my mind. It felt like I was crammed in the back seat of our beige Topaz without air conditioning for at least a month. We drove through gridlock traffic outside of New York City. I cried that I wanted to go see NYC. We probably stopped for a frosty. I didn’t want to go to New Jersey. Who the heck goes to New Jersey, anyhow? (We did. That’s who.) END_OF_DOCUMENT_TOKEN_TO_BE_REPLACED

Hummus. The word itself gets my mouth watering, and brings a smile to my face. The chickpea and tahini based spread of Middle Eastern origin found its way into my diet at an early age, probably around the time I threw a hissy fit at age 12 and refused to eat meat for all of my adolescent years, much to my family’s great annoyance. A cheap, healthy, filling snack full of much needed protein, I think I’ve lived on hummus alone at times. Enter the university years at Concordia, and hummus became very much a right of passage at many pot luck dinners and vegan soup kitchens. I’m half convinced one needs to be fully proficient in hummus making in order to complete their degree at Concordia University. END_OF_DOCUMENT_TOKEN_TO_BE_REPLACED

I suppose I’m expected to make some sort of post that explains to everyone out there in Internet land who on earth I am, and why on earth you should care enough to read this blog. I’m 27, I’m from Montreal, I have a moderately serious travel addiction that is held in check by boring obligations such as pets, a job, and lack of funds. I uprooted my life on a semi-whim in 2010 and moved to Toronto, which involved a career change. It’s been an eye-opening experience.

What else? Je parle français, but I’ve decided this will be a mostly English-language blog because I don’t write as well in French. I graduated from Concordia University in 2006 with a joint specialization in communications and journalism, but so far that degree has proved mostly useless. I am halfway through a graduate certificate in environmental science from McGill University, but that’s sitting on the back burner for now cause I’ve simply lost interest. I want to learn how to brew beer in the next few months, and I also want to get a SCUBA diving license. I was diagnosed as an adult as having ADD, but having already taken the scenic route through university and made it through, I decided not to do anything about it. It just allows me to get distracted by things like sewer grates in Rome and Duff Beer in stores. Seriously. 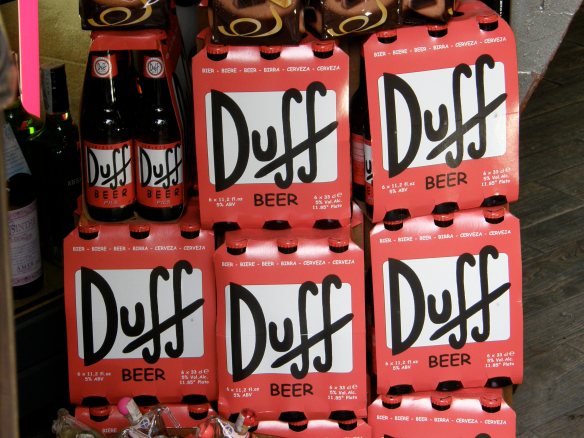 Duff beer here for me...

I’ve traveled to the following countries: Canada, US, Ireland, Greece, Italy, The Vatican, Egypt, Israel, Jordan, Palestine, Thailand, Cambodia, Vietnam, and Iceland. And I pooped in the washroom in the airport in Japan, but I never actually went into Japan, so I don’t know if it counts or not, but I think it does. I don’t have a bucket list of places I ‘must’ see, but there are few places that come to mind that I wouldn’t be interested in going to. The immediate short list includes France, the Czech Republic, Iceland, Belize, Costa Rica, Peru, Russia, China, Indonesia, and Morocco. Who knows where I’ll actually end up though?

Sometimes I travel alone. Sometimes I run off with my friend David, and sometimes I travel in more organized groups. Everything depends on how much time I have to plan a trip, where I’m going, and how much I can afford. I prefer to visit North America and Europe on the fly – I can muddle through enough Spanish or Italian to squeak by in Europe, and everything is easy enough to find and get around that I need minimal help. The first time I went to Israel, I went with Birthright Israel but I found the group structure took away from the experience. It was overwhelming being with the same 45 people or so every single day, and aside from 2-3 people, most of them got on my nerves the whole time. It felt more like a high school trip then a proper adventure, with every detail of our days planned out. I went back a year later with David, but we split up most of the time we were there, and that was a lot better. I figured out the intricacies of getting the bus from Eilat to Jerusalem by myself, stayed in the sketchiest possible hostel in Tel Aviv, and nearly had my bag blown up by the army in Acre. I went to Ireland completely by myself, but that was easy. Everyone spoke English and their infrastructure is highly developed. David & I traveled all over Italy together without too much trouble, and the only Italian I can really handle is asking if I was on the right train.

I went to Asia on a whim – the whole trip was planned from start to finish in about 3 weeks. I went with GAP Adventures, who took care of the nitty gritty details like transport to and from the border, accommodations, guides, translators, breakfasts, and things like that. All I had to do was buy a plane ticket and get my Vietnamese visa in advance. It made a quickly planned trip to a region I knew less about a lot easier, and took away a lot of stress on my part since I didn’t have much time to plan. It kind of changed my life, and led to that whim to uproot my life and move to Toronto.

Oh, and I’ve got those pet rats I’ve mentioned in the past. They’re like small, intelligent caged dogs except they only live 3 years or so.